DO NOT TAKE YOUR CAR ANYWHERE TO GET THIS DONE! IT IS SUPER EASY!

“But I don’t know anything about cars, I’m too afraid that I might mess something up and then have to take it to the shop to get more work done,” you might say. Fine with me – you’re not spending my money. But doing your own work on your vehicle, even if you’re not a mechanic, saves you a TON of money* and gives you a sense of satisfaction and accomplishment. And I’m not saying don’t ever go to a shop. There are things I can’t do, I don’t have the necessary tools, I don’t know how to weld, etc. Definitely support your local businesses, but support yourself too. Mechanics have to put food on the table for their families, but you have to keep food on the table for your family.

So here’s the story: I take my 2009 Civic in to get new tires installed. I don’t have the necessary tools to mount the tire on the wheel, so that’s one of the instances I take it to the shop. My inspection expires this month, so I say go ahead and inspect it while it’s there. Normally I check everything myself before I take it in so I can fix whatever’s wrong before it fails, but it was already there and it’s a 4 year old car, I figured I was safe. WRONG. The third brake light (the one in the middle above the trunk) was out. And Honda has decided they need to make more money, so instead of replacing a bulb like you would do in any normal car, you have to replace the entire LED strip. And you HAVE to get it from Honda, as AutoZone does not carry it. The shop wanted $175. $90 for the part, $85 for the labor. Holy cow!

They said it was so expensive because they had to entirely dismantle the rear portion of the car and it’s a very time intensive process ~ around 2 hours. I figured if it takes a mechanic 2 hours, it will take me 4 (or 8, or 2 weekends…), so I waited until I had a free afternoon to take care of it. That afternoon was this past Sunday. I dropped off my thesis to get bound on Saturday morning, then on the way home went to the Honda stealership to pick up the part so I would have it for the next day. It looks like a cheap piece of plastic that some 5 year old Chinese kid made for a total cost of about $3.87, but it cost me $88.59 after tax.

L and I had spent the hottest part of the day in the garden, which was good because I could wait until it cooled down a bit before I started my auto repair work. (I hate having to crawl around under an engine, under the hood, or contorting my body to squeeze into the back of the 2-door Civic and work with tools while I’m dripping in sweat.) My Haynes manual didn’t have anything about replacing the third light (second time they have failed me – first was when I was replacing L’s timing belt in her 2007 Accent), so I did a quick online search and found a text-based walk through on a Civic forum. This post, however, is complete with pictures and my own snarky “humor”. So enjoy!

1. Remove the jogging stroller from the trunk.

2. Lay down the back seats, feeding the center seat belt through the slit so the seat lays down easily. 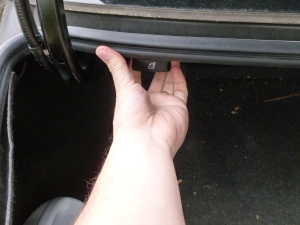 3. Disconnect the wire that leads to the brake light. This is the view from inside the trunk, looking up.

4. There are indentations on the front of the rear panel. This is where the panel attaches itself to the rest of the car. Put your fingers under there and pry up. It pops off easily. Don’t break anything (on the car or your body). 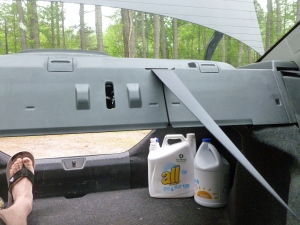 5. The wire that you disconnected from the wiring of the car is still attached to the body. See the little plastic thingy sticking up in the picture below? (You should, it’s circled.) Squeeze it and feed the wire through the hole.The panel is also attached near the rear windshield. Apply a little bit of pressure back there as well, and lift the panel.

6. Get out of the car, turn the panel over, and remove the screws attaching the speaker protector to the panel.

7. Remove the non-working LED strip, replace it with the new one.

8. Put everything back together, connect the wire, drink a celebratory beer.

I then proceeded to make a chocolate cake, which took way longer than replacing the brake light.

A side note: I was fully expecting this to take all afternoon, not 5 minutes. This prohibited me from fixing it right away and bringing it back the next day for re-inspection (in the middle of the month). I ended up having to wait almost 3 hours on 4/29 because of everyone else waiting until the last minute. Chalk this up as another life lesson and add it to the list of reasons why I find it extremely difficult to trust mechanics. Had I allowed them to do the work, would they have been honest and tell me that it only took 5 minutes so they were not charging me the quoted price? Or would they keep that their little secret and pocket that extra cash? It sickens me to think of the latter, and to think that so many nice, well meaning people get taken advantage of by sneaky sharks trying to make a buck.

If you still find yourself reluctant to do the work, bring me your car, the part(s), and something awesome (beer/pie/bratwurst/baseball tickets/baby sitting promise) and I’d be more than happy to do it for or with you!