On the tip of a farmer, I’ve been calling a bakery in Richmond to see if they have any expired bread for cheap. He said he could load a truck for $20. Apparently they let it pile up, then dole it out, first-come, first-served. It’s called Hog Feed bread, appropriately, and that’s what we wanted it for. Saturday, they had some.

W, WV, and I drove out to investigate. I walked into the bakery and the cashier said to go around back to the loading bay. She had propped a door open with a loaf of bread (ha!) and left us to fill up on our own. There were 6 bread-pallet stacks, about 8 feet high each, stuffed with loaves, buns, bagels, and pita flats. We hesitated, not knowing how to exactly start, then began bringing loaves to the car, stacking them into the trunk.

The cashier came back and I tentatively asked, “So, erm, how much will this be?” “Oh, 10 dollars, you don’t have a very big car.” So clearly, the only logical thing to do was just STUFF the car with bread – it was practically free and hey, we were there. We started an assembly line: I triple-loaded pallets, stacking the empties, and W carried them out to the car, lobbing them in. WV sat patiently in his car seat, saying, “Mmmm!” every time a loaf was added.

We didn’t stop. We were a car-bread-stuffing machine. Twenty minutes in, and since I couldn’t see the car from the loading bay door, I began to wonder, how much room we really had left. W said he had to close the trunk door and was throwing the bread into the back to fill it up. It was like one of those “how many folks can you stuff in a phone booth?” game shows. When the back seats were full, he rolled down windows to stuff in more, to prevent back-spillage. I went outside to observe – and the sight nearly made me pee myself. Our car was a cartoon-like bread wagon! WV was surrounded by a mountain of bread, clearly google-eyed over it and wanting to eat some. We couldn’t stop laughing. 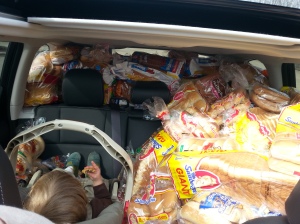 Finally we stopped, concerned that the bread was becoming a hazard to driving.

Officer: Excuse me, do you know why I pulled you over?
W: No sir, I don’t.
Officer: You have a lot of bread in the car.
W: I didn’t know there was a limit on bread in VA.

Haha, we were dying laughing at scenarios like these all the way home.

WV fell asleep in his back seat bread kingdom, and we were able to count the loaves – 398!!! – as we unloaded them. Some were giant flats of 20-30 buns, clearly meant for more than individual/family use. And guess where they are stored? The old shed! This is an insane amount of bread. It fills half the floor space, piled nearly waist high. And can we just be reminded that it cost about 2 cents a loaf? More than a loaf a day for a year! I think we have unrealistic expectations of how long it will last (demon preservatives), but until it goes bad, the piggies and chickens are going to have a real treat. And we discovered, some of it had just expired yesterday – we ate some for lunch, but decided we find store-bought bread pretty dang disgusting. We did debate the merits of feeding our animals such bread and settled on the logic that we don’t really know the source of the ingredients in their bagged pellet food either…and this was originally meant for human consumption, so we’ll live with it. Foraging on grass is best, but it’s winter and we don’t have a fence set up yet for the pigs.

Feeling quite proud of our bread haul…need a bagel?…come on over!

It’s even inspired poetry (thanks Dad!):

A rumor of ten-dollar bread
(there were four hundred loaves, it was said)
made its way to New York
on the wings of the pork,
and now it is stored in the shed.