March in VA is pretty unpredictable. The other day, it was a balmy 70 degrees, this morning we awoke to an inch of snow on the ground! But, since we do live in VA and our state isn’t as good as others in handling snow “emergencies,” my work always operates under a delayed opening to give VDOT a little more time to clear the roads. Which is great, since it gives me a few more hours in the morning to do farm chores!

I normally don’t get to feed the chickens in the mornings during the week because they’re “lazy” and don’t come out of the coop until the sun comes up. And if I throw food out to entice them to carpe mane (not sure if that’s a thing or not, but just roll with it) the pigs eat it instead (they know how to carpe mane). So this morning I was able to give the kittens and pigs food and fill up watering apparatuses, come back inside and eat my own breakfast, and then feed the chickens after the sun finally came out. We were also able to get some more seeds started! 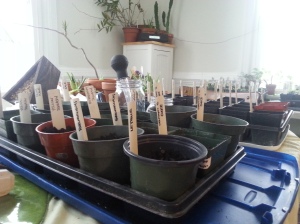 So here’s to small victories, in hopes that spring will be here to stay! Enjoy a shot or two of whisky (as opposed to green beer) in celebration and remembrance of the “saint” (technically was never canonised, but he was still a good dude). 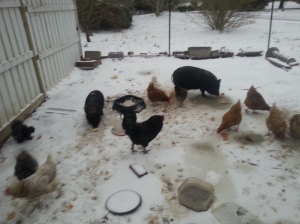